Will we ever see "Dance of the Vampires" again ? 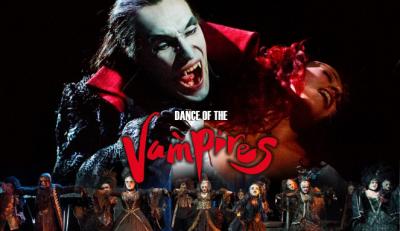 In Germany the musical "Tanz der Vampire" is the musical that won't go away. Since it's premier in Vienna in 1997 the musical, directed by Roman Polanski with musical by Jim Steinman,  has played in Berlin, Stuttgart, Hamburg and Oberhausen and even though Stage Entertainment said the last show in Berlin would be the last staging in Germany, it's back by popular demand in not only Berlin for the 3rd time , but also in Munich for the first time in 2016. When Stage Entertainment had 15 years anniversary the musical beat popular musicals like "Phantom of the opera", "Mamma Mia and "the Lion King" in a poll of which musical should make a return to Stuttgart. No doubt it's one of Germany's most popular musicals ever.

If you use the english title "Dance of the vampires" however, it's another story. The title is synonomous with John Rando's disatrous Broadway staging that's known as one of Broadway's biggest flop ever. Quite a contrast, but if you sat through the embarrasing mutant of a musical that was "Dance of the vampires" was, it's not hard to spot why and I REMEMBER EVERYTHING, like it happened only yesterday ! The music and book did not go together. One would expect a musical would be in good hands at Broadway, but that certainly wasn't the case with "Dance of the Vampire" . The bad reputation probably prompted american reviewers to label this years Frensh version  "Le bal des Vampires" a flop, but the joke is on them, as the production was a hit and extended twice.

A lot of fans are hoping for an english language run at London's West end, but here you can't escape the english title and that would probably be enough the make financial backers nervous. The finnish version used the english title and that turnes out pretty well as the musical was popular there too. We are also still waiting for the first Scandinavian version. The finns did call their version that, but is Finland really Scandinavia ? I have seen the show in 10 different cities and I would love to see the show in my own language, but the questing is if the Broadway production still makes teater companies nervous. I'm not. It will be a hit, just as long as it's Roman Polanski's version and NOT John Rando's.

The video below is from the last staging in Paris and the graphics at the top is from the Finnish version.