Whistle down the wind in Stendal 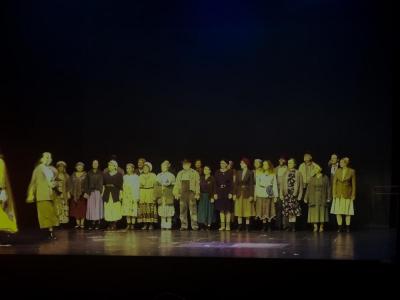 Since the musical "Whistle down the wind" released for amateur productions it has been performed various places in UK, Australia and the US. When I purchased a ticket for €10 in a german town I never heard of, I really didn't know what to expect, but it has been nearly 10 years since I last saw the show in Edinburgh, so I thought I'd risk it and I'm glad I did. The production is staged by the youth musical club of the Altmark Theater and it wasn't the most lavish production ever but then Whistle never was, which is why is perfect for such a project and there were more musicians here than most of the recent german productions of "Tanz der Vampire". The cast could easily make you forget that you were not in a big budget theater in Berlin. Especially Andreas Müller as the Man and Lea Hoffmann as Swallow, but also Julia Lehmann as Ed were amazing. Of you could easily be reminded when it came to constand taking and phone photo taking in the theater which I'm ot quite used too.

I'm not sure if it was lack of male performers that meant that Boone, Ed and Poor Baby was played by women, but it was certaily different. I don't mind Ed and Poor Baby, but it took a bit of getting used to the Boone was now the mom and that the kids lost they dad instead.The father daught dynamic was somehow different in the original even though the dialog was mostly the same. One could argue that when the musical has been translated into German, that there's not much Steinman left, but Jim's fingerprints are still all over this show.

There was some minor sound mix glitches and minor hickups in the ensemble parts, but all in all a really good performance and I'm really glad I took the trip to Stendal and it