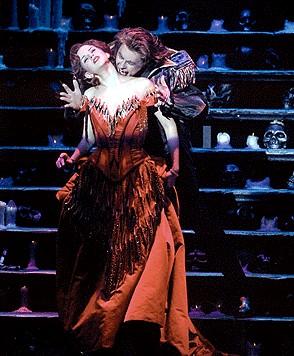 Tony Award winner John Rando (Urinetown) directs and John Carrafa (Urinetown, Into The Woods) choreographs the musical starring Michael Crawford (The Phantom of the Opera) and featuring a score by Jim Steinman with a book by David Ives, Steinman and Michael Kunze (who is also credited with the original German book and lyrics).

Set in Lower Belabartokovich, Carpathia, in "1880-something," the revamped Broadway production begins, as director Rando best explained, thusly: "Sarah and her two friends are out picking mushrooms when they come across this very forbidden territory, near the castle of the Count Von Krolock. They encounter an enormous amazing group of vampires — who happen to love rock 'n' roll and really dance to it well."

The production then follows the evil Count von Krolock and his mission to coax the young Sarah to his castle for her birthday — which happens to fall on the night of the total eclipse of the moon. However, her innkeeper father Chagal along with the object of his lust Magda and wife Rebecca have been enlisted by well-known vampire slayer, Professor Abronsius and his factotum Alfred to save her from the clutches of the night. Krolock — who also embodies matronly Madame von Krolock and a foul-mouthed bat — is also aided by his extremely effeminate son Herbert, his new Renfield-meets-Riff Raff slave Boris and the dozens of dancing damned in his quest.

The original cast recording of Dance of the Vampires will be released by Interscope Records.

Composer Steinman is best known for his epic rock songs including Meatloaf's "Bat Out of Hell" albums, Air Supply's "Making Love Out Of Nothing At All," and Celine Dion's "It's All Coming Back To Me Now." The Vampires songlist includes "Overture," "Angels Arise," "God Has Left The Building," "Original Sin," "Garlic," "Logic," "There's Never Been A Night Like This," "Don't Leave Daddy," "The Invitation," "A Good Nightmare Comes So Rarely," "Death Is Such An Odd Thing," "Braver Than We Are," "Red Boots Ballet," "Say A Prayer," "Come With Me," "Vampires In Love (Total Eclipse of the Heart)" "Books, Books," "Carpe Noctem," "For Sarah," "Something To Kill (Our Time)," "Death Is Such An Odd Thing" (Reprise), "When Love Is Inside You," "Eternity," "Confession Of A Vampire," "The Ball: The Minuet," "Never Be Enough," "Read My Apocalypse," "Braver Than We Are" (Reprise) and "The Dance Of The Vampires."

The revamped Broadway production, originally scheduled to open Nov. 21, delayed its opening to Dec. 9 due to the absence of its director John Rando. The Tony Award winning helmer had traveled to Texas to be with his ailing mother, who has since passed away.