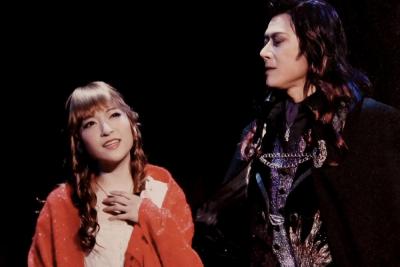 The show in Osaka marked my 25th show in 11 countries and 9 languages and was also the furthest I have travelled to see "Tanz der Vampire". I expected that the show might be a bit different out here, but I was surprised over how much.

From the opening scene it was clear that the sets was not going to as lavish as we are used to in the European production, but it was also clear that they didn't get how the music is supposed to sound. Even though I've seen both Seinäjoki and Hamburg (2018), I was still surprised at how flat and boring it was possible to arrange this music.  The drums were barely audible and the thunderous hits that's usually very prominent, were heard only twice in the entire show (through the wildernes and Finale 2). The sound was a bit distorted when there were multiple voices singing.

There were also a few things I just didn't like, such as Koukol not being scary. The professor starts his song by saying ".. but you fear him", but they really didn't. In the end of "Logic" 4 burlesque-style dancing girls show up and in "death is an odd thing" Magda sits on top of Chagal's "dead" body singing. Just a little too kinky for my taste. The Vegas style lighting was out of place at the ball scene, but I would accept it in the very last scene, which incidentally was without the great "cross dance".

The character of Count Von Krolock bring back memories from Michael Crawford on Broadway. He whispered more than he sang and the notes he DID sing was not all correct. In the last scene he's wearing a purple grittery suit, that looked more like Liberace than the dark operatic character he's supposed to be and he runs around in a victory pose after biting Sarah.

The cast in "Eternity" whispers the first verse, but here I actually don't mind it as it gives it some varity. Another change from the european version is we have the original "ret boots ballet" which I don't think has been performed in Europe since 2000, but been improved from Stuttgart and on. For me it's ok to see it again, but a bit sad for the japanese, as the new version is way better.

Apart from Krolock, the cast was pretty good, especially Sarah, allthough I did not enjoy the professor, but that was more his take on the character than his performance.

All in all it's pretty hard to find the positives in this version of the musical and I don't know if the audience agreed or it was just a japanese thing, but I never seen such a silent audience at a TdV show. I feel bad for the people behind the show, but I'm going to have to call it my least favorite show since the Broadway disaster.