Leah Hocking Joins Cast of Dance of the Vampires 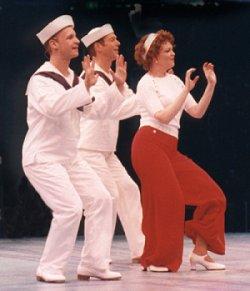 As Ken Mandelbaum reported earlier today, Leah Hocking will play Magda in the upcoming Broadway production of Dance of the Vampires, according to a production spokesperson. As we previously reported, Julia Murney, who was originally announced for the role, dropped out of the production for unspecified reasons.

Hocking is currently starring in The Road to Hollywood at Goodspeed Musical's Norma Terris Theatre through September 1. She has appeared on Broadway in The Wild Party, Jekyll & Hyde, Grease and Guys and Dolls. Her off-Broadway credits include Forbidden Broadway and Inside Out.

Set in Lower Belabartòkovitch, Transylvania, Dance of the Vampires, follows Count Von Krolock, a 19th century vampire whose passion is to win the soul and body of a beautiful 18-year-old virgin, Sarah; but, his un-deadly intentions are upset when a vampire killer arrives. The tuner features music and lyrics by Jim Steinman and a book by David Ives, Steinman and Michael Kunze.

In addition to Hocking, Dance of the Vampires stars Michael Crawford, Max von Essen, Mandy Gonzalez, René Auberjonois, Ron Orbach, Liz McCartney, Mark Price and Asa Somers. The musical, directed by John Rando and choreographed by John Carrafa, is scheduled to begin performances at the Minskoff Theatre on October 14 in preparation for an official opening on November 21.