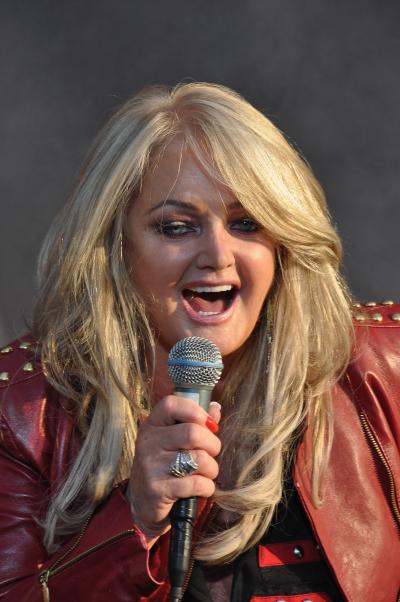 Even though I've been listening to music since the late 70's, I wasn't much of a concert-goer back then, so it's pretty nice that the old heroes like Bonnie Tyler keeps going, giving me a second chance to experience them live. Yesterday, I got to see her live for the first time when she played at the Open Air festival in Korsør, Danmark along with fellow vintage icons such as Shakin Stevens, Nik Kershaw, Smokie and Nazareth. After listening to the work Bonnie has recorded in recent years I was a bit worried about what Bonnies voice would sound like, but I must say she did allright for a woman only days away from her 60th birthday. When waiting for Bonnie to arrive I was thinking that "Have you ever seen the rain" would be a good way to open, but that it would be a bit weird because Smokie played it as one of their last songs as the act before. When my premonition turn out to be true I changed my mind because Jim's arrangement is just so much different than the mushy Smokie version, so it worked out fantastic. Afterwards we got songs like "Hide your heart", "To love somebody", "It's a heartache", "Lost in france" and "Straight from the heart" and I was still unpatiently waiting for the first steinsong, when she said something like "In 1983 i started working with a sheer genious....." which of course was the lead in to "Total Eclipse of the heart". Now it's a special thing to hear you favorite song in the whole world performed live along with a crowd of singing fans and must admit a had a big lump in my throat. The whole band did a fantastic job with it. I can help wonder how many in the audience that was surprised by hearing the extra 2 verses you normally don't hear in the radio. While I aboviously expected to hear Bonnies biggest hit live, I was very pleasently surprised to hear "Faster than the speed of night" as the next song, because it was never a big hit and judging from the audiences response to it, you can only wonder why it wasn't. Bonnie continued to play songs like "river deep, mountain high" and "the best" and somes song I didn't know. I like that fact that she explained that "The best"  was her song before Tina Turner. I was wondering if she was gonna do "Take me back", since I believe it was the songwriter Billy Cross I saw backstage, but she didn't. Instead she finished in great style with "Holdning on for a hero".  Thanks to Bonnie for one of the best concert experiences ever.