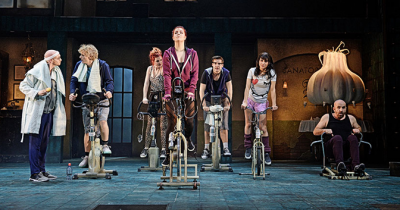 A piano-playing count, a professor singing on an excersice bike, a sanatorium instead of an inn and locking up Sarah with a power drill? It all sound a bit weird, but it's reallity in the swiss city of St.Gallen where their non-replica version of the musical "Tanz der Vampire" is running. The costumes, choreography sers are very different, but the music and book is pretty much the same, so even though is a strange experience it's nowhere near the Broadway dissaster. It's more remmenicent of the finnish version in Seinäjoki and rather fun to watch allthough there are stuff you might be missing, such as the spinning house in "Say a prayer..",  caskets in "Ewigkeit" and cross dancing in the finale. Musically it's not a feast with a total of 7 musicians, but we're getting a bit used to that with the german productions as well and maybe it is just us hardcore fans that appriciate the big lush sound from the original. I did enjoy the big ensembke pieces like "Carpe noctem" and the finale, though.

All in all , after close to 20 shows, it was enjoyable to see it in a new way and in a region where the "real" version has been playing only 2,5 hours aways 4 times now, it makes sense to do it a bit differently, but I probably wouldn't be so supportive if this show was exported to say London or Copenhagen.