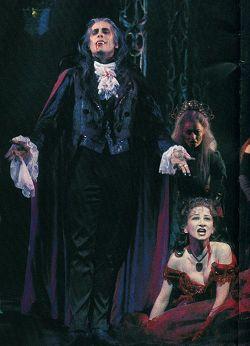 We are in a Transylvanian graveyard near a village with an unpronouncable
name. It is three nights before Halloween, 1880-somehting. Sarah, the
beautiful teenage daughter of the local innkeeper, is out picking mushrooms
when a pcak of very cool young vampires appears out of the mist, dancing with
rapturous abandon. Sarah is entranced as a coffin rises from the ground
containing the mesmerizing and extremely cool Count Von Krolock (alias
Michael Crawford). The Count sings to Sarah seductively and promises to
return for her at the total eclipse of the moon--when Sarah, in exhange for a
small bite, can become Queen of the Vampires and rule the world. How can any
small-ime girl resist? But then arrives Professor Abronsius, a rather
intensely wacky vampire killer, with his handsome if sweetly dim assistant
Alfred. Alfred is istantly smitten by Sarah and vice versa. Torn between
Alfred and the Count, Sarah runs off to Krolock's castle, pursued by Alfred
and Abronsius. There are ecstatic love duets, close encounters, unbridled
dancing, wild comedy and, of course, bats and a madman named Boris. Sarah has
to choose between earhly love with Alfred, or eternal passion with Krolock in
the Vampire State Building. The climactic vampire dance crupts as the moon
starts to eclipse, and everybody somehow manages to find happiness. .
.Transylvania-style.

Category
Dance of the vampires
Author
Steen
More in this category