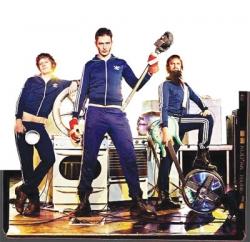 That’s right: In 1983, Tyler recorded “Total Eclipse of the Heart,” the towering power ballad written by Jim Steinman, author of Meat Loaf’s operatic Bat out of Hell album. The track went to the top of the charts and earned Tyler a Grammy nomination. And any ’80s compilation without it was, clearly, produced by someone whose heart was never broken.

“Your love is like a shadow on me all of the time.”

Earlier this year, a video of Hurra Torpedo performing “Total Eclipse” on Norwegian TV circulated on the Internet. In the video, the band wear matching royal-blue tracksuits, and play on kitchen implements. “Turn around,” percussionist Aslag Guttormsgaard squeaks as he whisks an empty pot atop a busted-up stove. Guitarist Egil Hegerberg counters, straight-faced, “Every now and then I get a little bit lonely and you’re never coming ’round.”

Back and forth they go. Turn-a-round ...

The beat kicks in when Kristopher Hugh Martin Schau, all 6-feet-7 of him, starts opening and rather adamantly closing the door of a horizontal freezer, at the same time clobbering with a drumstick one of the three stoves, his headbanger hair shaking like a pompom. Eventually, Guttormsgaard, the nut job of the bunch, joins Schau by driving — melodramatically and in time with the music — a metal pole into the top of his stove. The crescendo is messy, and by number’s end only Hegerberg isn’t fagged and sporting a plumber’s butt.

Speaking on the phone recently from the Mondrian Hotel on the Sunset Strip, Hegerberg answers the question, Why “Total Eclipse”? “Well, it is a very great song,” he says in stilted English. “Great songwriting... And because of the massive sounds, it’s very well suited for us. You have a grandiose, pompous refrain, so, yeah, it’s built to be played on appliances, I think.”

Hurra Torpedo recently finished a mini-tour of the States — their first gigs outside Norway, where they’ve been playing for about 12 years. They used to be a regular old power trio, but, says Hegerberg, their drummer got left behind at a concert years ago — before Hegerberg had even joined the band. “Yeah, the guys never saw him again, so they had to find a new way of playing the music,” he adds, suppressing shared laughter with a nearby Guttormsgaard.

Now, hold on, here’s where the story takes a turn. Attracted by the “Total Eclipse” video, Gabe Frazzelblatt of Frazzelblatt Entertainment, an Illinois-based manager of novelty acts including the Donkey & Llama Kissing Show and Flying Cat Circus, booked Hurra Torpedo for a couple of U.S. shows. Along the way, Frazzelblatt Entertainment office manager and part-time filmmaker Pip Simon documented their escapades for a mockumentary (snippets of which can be viewed on www.thecrushingblow.tv). Notice that in the mock-doc, instead of a tour bus, the band drives a Ford Fusion donated by Gabe’s brother, Abe, who runs a car dealership. Ford even created a sweepstakes whereby entrants can win the very Fusion that Hurra Torpedo drive.

Only Frazzelblatt Entertainment doesn’t exist. Pip Simon is an improv-theater actress posing as a filmmaker. And Gabe doesn’t have a brother named Abe who runs a dealership. The sweepstakes, however, is real.

That’s because the elements surrounding Hurra Torpedo’s “tour” were fabricated by Ford, in conjunction with ad firms J. Walter Thompson and Kirt Gunn & Associates. Yep, all of it was a stunt: the gig held at a replica of Stonehenge (composed of freezers situated in the desert); the show at the Big Texan in Amarillo, where the 72-ounce steak is free if eaten in an hour; and the show near the Peachoid, a water tower in Gaffney, South Carolina, made to look like, well, a giant peach. The idea was to subliminally push the Fusion model on price-conscious, Web-obsessed trendsetters.

But why such a convoluted ploy — one so subliminal, no one’s even noticed it? (The ’Tap–inspired “Danger Kitty” ads for Discover Card were far more obvious in their M.O.) “We believe good storytelling has long-term value,” says the improbably named Linda Perry-Lube, “car communications manager” for Ford. Of course, good storytelling requires good characters; Perry-Lube points out about the band, “There’s more [here] than just the one-note shtick of banging an appliance.”

It’s true: Try not snorting during the mockumentary when Hurra Torpedo toy with a Memphis DJ who thinks they don’t speak English, or when Guttormsgaard freaks out in an appliance store. The “Ultimate Groupie,” Gayle, is also good for a laugh, while tour manager Ted Frazzelblatt (Gabe’s nephew), is a riot. It’s as if everyone graduated from the Christopher Guest school of Intentional Idiocy.

The Hurra Torpedo phenomenon has become so widespread that in late November the film’s trailer (at www.hurratorpedo.com) was the most downloaded video on iFilm.com, and the band’s MySpace site now boasts more than 5,700 friends. Not bad for a group without a record in the States.

Apart from bulkier, harder-to-find used appliances (the stoves need replacing after each show), Hegerberg’s only complaint about the States is the overabundance of muffins and the lack of proper breads. He seems totally content as a pawn in Ford’s game, and is stalwart in brushing off inquiries about the car manufacturer’s scheme, even after Perry-Lube’s admission. Though why should he question the freedom Ford is taking to sell Fusions? They’re helping make Hurra Torpedo — his honest-to-God real band — a household name.

All in all, the campaign is imaginative and exquisitely conceived — an off-the-beaten-path move for a traditionally boring advertiser like Ford. But its success will ultimately depend on how consumers react to such clandestine methods once word spreads from advertising trade pubs to the general public — a public already feeling duped by marketers into war, among other things. If Fusions don’t sell as a result of the campaign — and how could they if nobody gets it? — then all it amounts to is a free trip to America for three Norwegians, one helluva home video, and a couple of laughs.

“Isn’t it funny how this whole world works?” Hegerberg asks.