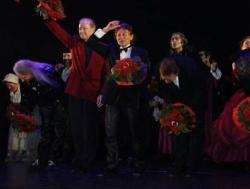 The Roma Theater has closed another stage of the casting for the musical Dance of the Vampires. Roma's largest casting to date, it began last autumn. By March 14, 24 candidates had been selected from among the hundreds who included many celebrities (e.g. the pop vocalist Piasek, aspiring to the role of Alfred). A large part of the finalists are professional actors from musical theaters across Poland. The dance troupe of 16 people has already been selected and approved by the producers.

The whole of the casting was overseen by theater director Cornelius du Crocq Baltus and choreographer Dennis Callahan. The final decisions were made by Roman Polanski, who chose the protagonists at closed auditions that continued throughout March 14.

The actors competed for the roles of their dreams, following a few days of preparations at workshops conducted by Calahan and Baltus. "For each of the parts, I wanted to show Roman two candidates, three at the most," said Baltus before the final casting. "Polanski came for one day and faced a hard task. Those who have made it are really good." In the next issue of the Voice, we will reveal the details of the final casting and the shortlist.

Polanski's next visit is planned for early August. The show will premiere in October.

The musical Dance of the Vampires is based on the film The Fearless Vampire Killers, Roman Polanski's movie from 1967. The movie is classified as a horror classic, even though it is actually a pastiche of the genre. The world premiere of Dance of the Vampires took place in 1997 in Vienna, where the musical has been seen by almost 1 million people. Subsequent productions were staged in Stuttgart, Hamburg and on Broadway.