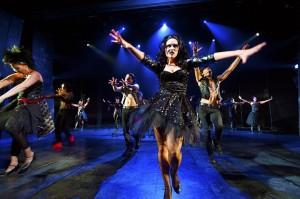 Last night I had the pleasure of seeing the succesful finnish version of the musical “Tanz der Vampire” in the city of Seinäjoki about 350 km north of the capitol Helsinki. Upon arrival one might wonder, why the scandinavian premiere of this musical is set in this relatively small city, but the local theater, designed by the famous arcitect Alvar Alto, has a long tradition for staging successful shows. Even so it might be a bit unfair to the finns, that I'm reviewing this after seeing the show 12 times in 9 cities, because it's still a small theater with limited facilities.

With that in mind, I was impressed with what they had done. Some of the sets worked well, especially the scene in the vault, when the stage rises, worked really well and they managed to get the vampires out of their caskets quite nicely without the elevating stage. The library and the entrance to the castle also worked well. Unfortunately the storyline was hurt by the absence of the rotation inn. Rebecca and Magda was way to close to Sarah in that scene instead of the "implied" way in the german version with the candles. The show is billed as "non replica", so the caracters are a bit different than the german version. Most noticable is Koukol who is a brute in a long fur coat instead of an ugly hunchback. I could live with that, but he should NOT be singing the first part of "Carpe Noctem" since he's not a vampire.

Chagal is a bit more goofy and the professor is a bit less goofy. I kinda like this more dignified Abronsius, even though his dress at the end was a bit of a distraction. Herbert looked a bit more like a girl and was not quite as "gay" as we're used to. The performance of Sarah, Magda, Rebecca and Alfred was excellent, while Krolock, even though he did ok, wasn't in the big Krolock-league. It's also the first time I've experienced that the largest applause was not given to the count. All in all the show was a very enjoyable experience, but I do have one problem. The musical director has a hell of lot to learn about Jim Steinman. I can understand why the orchestra doesn't sound as lush a some of the due to the fact that it's a very small live band backed by recorded music, but I just don't understand the need to leave out the thunderous hits that's one of Jim's trademarks. The first act just don't close properly without the floor shivering and the professors conclusion before the finale is just not conclusive without the thunder. To put it in Jim's words, we just never went over the top and that's a shame. Even so this trip to Seinajoki is an experience I would not have wanted to be without. Thanks to the team for the show.